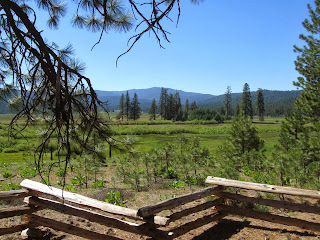 The news arrived last week. After a ten year wait, the Mountain Maidu would reclaim Humbug Valley from Pacific Gas & Electric. I teared up reading the email. I’ve been writing about this story for a couple years now, an almost impossible saga of a small federally-unrecognized tribe fighting for 2300 acres in the Sierras that have somehow—miraculously—remained undeveloped and are now—miraculously—being returned to them.

A celebration was planned, and I did not plan to miss it.

I drove 800 miles south along the east side of the Cascades through thin cold November air tinged with sage and juniper, past cars with headlights out and smokers in hoodies huddled outside mini-marts and the still-snowy volcanoes--Adams, Hood, Jefferson, Sisters, Shasta, Lassen—floating over it all.

A day before the celebration, I visited with my friend, elder, author, and activist Beverly Ogle. She sat beside her woodstove surrounded by her unfinished manuscripts, beneath a photo of her grandmother in full native dress, with her children and grandchildren coming and going, and she beamed. Like Martin Luther King Jr., she said, she had a dream.

“Only difference is I lived to see it come true,” she said.

The next morning I drove in circles around tiny Chester, California, lost and panicked, until I saw a vintage Ford pickup and U-turned to follow it to a newish building beside a park where kids clambered on rocks under tall pines. A dog I recognized lay unleashed in the sun. This was the place.

Inside, the crowd gathered with the casual ease of a family reunion or a church picnic. Young men, heavyset with braids and ball caps and baggy jeans, held squirming kids in their arms. A group of middle-aged women, both native and white by looks (though it’s dicey to guess who’s native by looks) set up a drum circle. Potluck dishes accumulated on folding tables including venison stew and small Dixie cups of acorn paste, a traditional Maidu staple. (It tastes exactly as you’d imagine: thick, earthy, nutty, slightly bland.)  I added my own small salad—cherry tomatoes and cukes I’d chopped at a pullout in the sun since it was too cold at my campsite—and went to talk to Beverly’s son Ken Holbrook.

Ken is the brand new executive director of the Maidu Summit Consortium (there’s never been one before.) He wore a crisp white shirt, grey jeans, and a tie, the only tie in the room. He’d recently traveled to a conference Salamanca, Spain to present their efforts to reclaim Humbug Valley and their goal to use TEK—traditional ecological knowledge—to manage the land as an example not only to other indigenous people but to land managers everywhere. When he spoke in Salamanca, he said, he stood in the exact place where Queen Isabella commissioned Christopher Columbus. He told me this story—told anyone who would listen—with less irony than giddy triumph, grinning wide, nearly bursting with it. 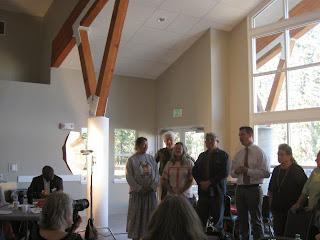 When at last formalities began, members of the nonprofit consortium stood to speak, people who endured years of negotiations, interminable meetings, to get to this point. Their eyes sparkled as they described Humbug Valley and how this moment was meant to be and their hopes for the future.

One woman, impeccably dressed, with the poise of a no-nonsense substitute teacher or perhaps a U.S. Senator, was the only speaker to show any hint of anger, any sense of the injustice of the past 200+ years. She stood, nearly trembling, and said simply:

“I never thought I’d live to see Indians given anything by the dominant culture.”

The applause was long. The truth undeniable. 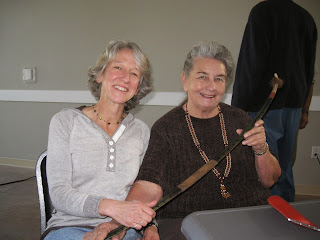 At the end of the speeches, a surprise announcement was made. Well, it was a surprise to Beverly Ogle. Her kids had told me about it excitedly in her driveway the day before. Beverly was awarded a special lifetime achievement award by the Indigenous Communities of Northern California. With it she received a hand-crafted bow.  Her daughter, Brenda, presented the bow, and announced with pride that Beverly Ogle is the first woman ever to receive this award.

But, Brenda explained, there were no arrows to go with it. The arrows come later, next spring, when the Maidu return to Humbug Valley to begin the work ahead.

What a wonderful event! So good to hear also about the new and different ecological stewardship of this land. Will be interesting to see how it unfolds.

Ana Maria Spagna is the author of Potluck: Community on the Edge of Wilderness (2011), Test Ride on the Sunnyland Bus: A Daughter’s Civil Rights Journey (winner of the 2009 River Teeth Literary Nonfiction Prize), and Now Go Home: Wilderness, Belonging, and the Crosscut Saw ( named a Seattle Times Best Book of 2004).

Her writing on nature, work, and life in a small community appears regularly in High Country News, Mountain Gazette, Oregon Quarterly, and elsewhere. She lives in Stehekin, Washington.